The Supreme Council of Universities held its regular meeting chaired by Prof. Dr Khalid Abdul Ghaffar, Minister of Higher Education and Scientific Research, on Saturday morning at The New Valley University in the presence of Dr Mohamed Latif, Secretary of the Council, and members of the Council. The Council thanked the family of The New Valley University headed by Prof. Dr Abdulaziz Tantawi, President of the University, for hosting the Supreme Council of Universities meeting, and congratulated Prof. Dr Al-Sharqawy for renewing confidence in his sovereignty as President of Suez University.

At its meeting, the Council stressed:
– Cooperation and integration between university hospitals and hospitals of the Health and Population Ministry to improve medical services provided to citizens in all governorates of the Republic.
– Activating the role of universities in confronting extremist ideas.
– Coordinate a Cooperation protocol for three universities with The New Valley Province.
– Supporting science colleges at public universities with 66 million Egyptian pounds.

The Council witnessed the signing of a cooperation protocol between the universities (Cairo, Tanta and Al-Arish) and The New Valley Governorate on the allocation of 1,000 acres per each university for reclamation, cultivation and agricultural research, and increased productivity of strategic crops to achieve self-sufficiency, using the latest modern irrigation and solar energy systems, with 200 acres allocated to scientific research service (new crops, increased productivity, rational water ), as part of The President’s Initiative to reclaim desert lands and encourage the Agriculture college’s graduates to participate in small and medium-sized enterprises in agriculture, and signed cooperation protocols with Major General Mohamed El-Zamlot, Governor of The New Valley, Prof. Dr Mohamed Osman Al-Khasht, President of Cairo University, and Prof. Dr Mahmoud Zaki, President of Tanta University, and Prof. Dr Hasan Al-Demardash, President of Al-Arish University.

The Council reviewed the presented report by Prof. Dr Mahmoud Saqr, President of the Scientific Research and Technology Academy, on the Ministry’s Initiative ‘Science up’, which was implemented by the Scientific Research and Technology Academy to support the faculties of science at public universities, explained that the initiative in its second year 2021/2022 will support 22 faculties of science at Egyptian universities by 66 million Egyptian Pounds to support the capabilities of colleges in the Physics and Mathematics fields.

-The Council Review the presented report of contracting the Board of Directors of the Faculty Welfare Fund and their aides at universities ( institutes and research centres) with Misr Insurance Company to provide health care and support their members, for more information visit the fund’s online platform: http://hcf.mohesr.gov.eg

-The Council reviewed a report on student activities at universities during the second semester, including schedules and executive procedures for intensifying awareness programs and activities aimed at developing the university youth’s awareness of all the challenges facing the country, as well as organizing technical competitions among all Egyptian universities take place in the City of Culture & Arts in the administrative capital

– The Council reviewed a report on methods of securing digitally converted books, Copyright and preventing printing, as part of the protection of intellectual property rights of faculty members, as well as another report on the project to establish biometric data centres at universities collecting all related data 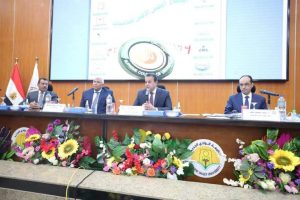 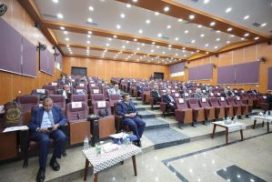